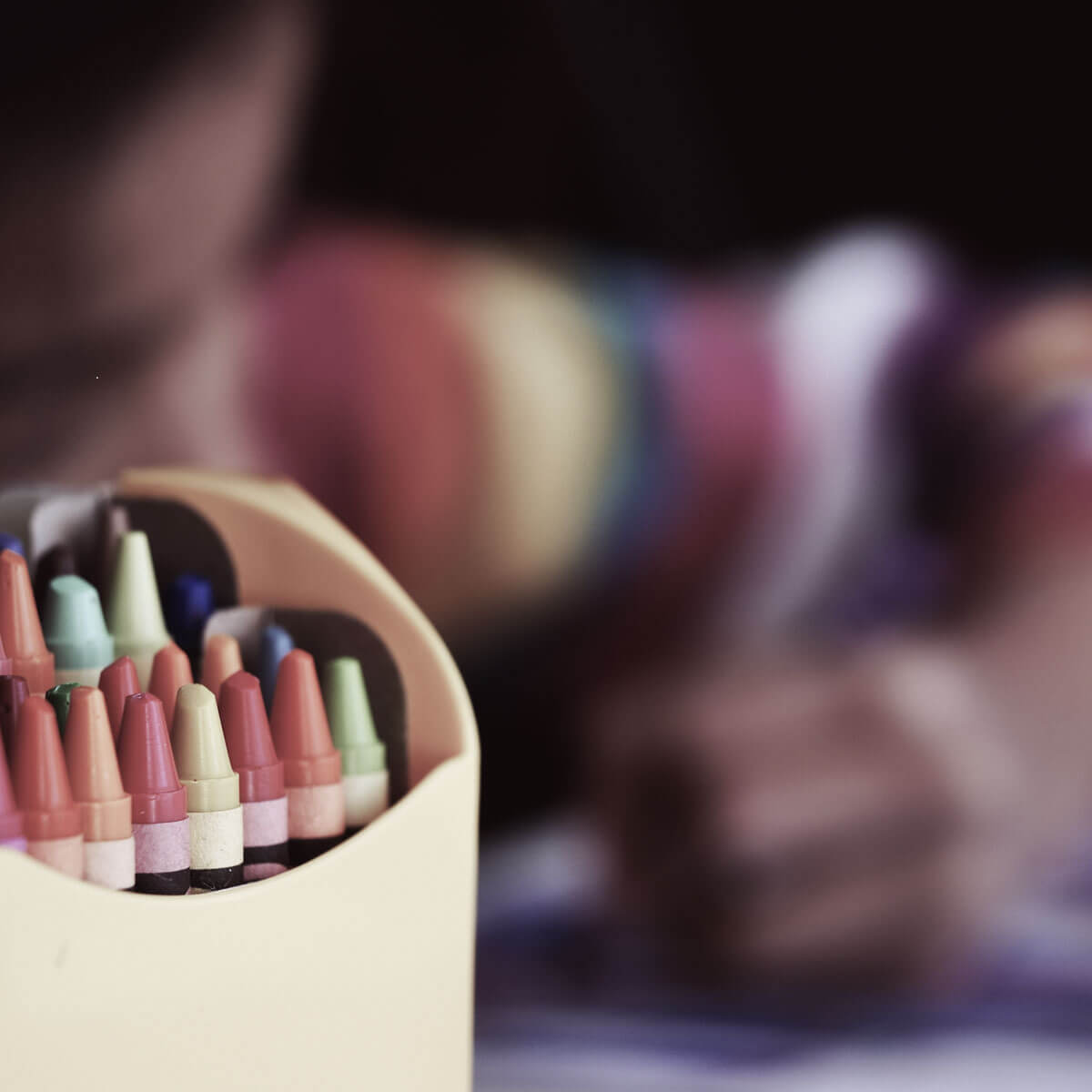 I was in dismay and anxiety was setting off alarm bells in my entire body.  I ducked my head below the desk and pretended to look for something in my bag so that no one could see the tears.  I had broken something and I had no idea how severe the penalty would be.

I had snapped a crayon in half.  Sat between Dorothy Burnett and Lisa Williamson on my third day at school, I was creating the bluest sky ever.  I had never had a crayon before and I was streaking the top of my paper with artistic abandon; till it snapped.

It would have been OK had Dorothy not leaned over and said, “Ohhhhhhhhh,” implying I was in trouble.  I recall the cold plunge from creative elation to concern for personal legitimacy.  The world caved in.  It was probably the emotional whiplash of joy to desperation that provoked the over-reaction but I felt wretched and very alone with my face hidden in my new school bag.

Lisa tapped me on the back, “Go tell Mrs Reid,” she said, like an adult.  Or an angel.  I limped to the teacher’s desk.  Mrs Reid saw me coming and stood up indicating for me to follow her into the storeroom. There were two little seats there. She sat on one and I sat on the other.

At exactly the same time as she asked what was up, I started to cry.  The sobs were unstoppable;  I was too scared to unclasp my fist with two sweaty pieces of crayon in it. She gently took my hand and opened it for me.

First, she explained that what I had done was to create two crayons, which meant that Lisa and I could draw the sky together.  Secondly, in simple words, she told me that what I felt inside was more important than anything material.  I was to promise her that I would never get this upset again over something that could be bought.  I promised and received a little hug.

She is and always will be my favourite teacher/lecturer/trainer/mentor/guide: Mrs Reid.

Last week my EA, James called me from the house just as I was returning with some visitors.  In his matter of fact style, he explained that my groundsman had smashed our huge picture window that looks out over the fields to the Gargunnock hills.  A stone had whipped off the strimmer and taken out the whole pane.  Ross was upset even though James had already arranged for a glazier and told Ross that I would be fine about it.

As soon as I parked in the courtyard, I went to find Ross.  There he was, hovering around the window, looking at the damage in the forlorn hope of a different past.  He was ashen and agitated.  He started to explain what happened but I stopped him.  I didn’t care.

I still hadn’t looked at the window.  It was of no interest.  I saw only Ross’s eyes get a little moister as his harsh inner critic prepared to unleash on him.  I kept his eye contact and heard myself say “Nothing we can buy is as important as how you feel inside.  Don’t think about it anymore.”

It landed.  People can tell if you are speaking the truth.  Ross felt me speak from a 47-year-old experience and he knew I meant it.  He disconnected this random event from the other scornful stories of his life and prevented it from being another chapter in that book.  At lunchtime, we went to the Distillery for food and had one of our best catch ups.  The window is still broken … but soon it won’t be.

I learned a lesson when I was five that got into the muscle.  I experienced the learning.  Body, mind and a rather tender heart were all active in the incident of the blue crayon. The context, my age, my state and my mindset were taken into account by a wise teacher as she took the opportunity to introject a life lesson that I will never forget. Things are not that important; people are.

This week, four new team members joined James and me at The Shireing as we launched the next chapter of Quaich.  This brilliant new team are very energised and we had a terrific time discussing shadow and bioenergetics this morning.   We pride ourselves in having some of the best ideas and the new slides look terrific.

But for two of them, it was their first day and they got gifts to show them that how they feel is important to us. This led to a good chat about their hopes for their time at Quaich.  My new EA turned 25 today and it’s his first week away from his friends in Watford.  He had a parcel waiting outside his bedroom door this morning and, of course, an embarrassing round of “Happy Birthday to you,” with cake and candles.  We had a team lunch at The Smiddy.

In each of these educators I want to instil the knowledge that we work with human beings.   I never want to run training programmes that focus on content.  I want to know what stories people are trailing into my class.  I care about their emotional state.  They need to know that some of their shadow can leak without punishment; that they can safely bring their whole self to the programme and have an experience.

In the words of Werner Erhard, “The truth believed becomes a lie; the truth experienced remains the truth.” Maybe that’s a little stark but it reminds us that unless our events make room for the human in our delegates, the words will only go so deep.  When we can invite the whole person into the conversation (and kindness is the most reliable way) the learning gets into the muscle.

Now, where are my crayons? I have some blue skies to draw with my team and I need to find out if you can snap a crayon into six pieces.